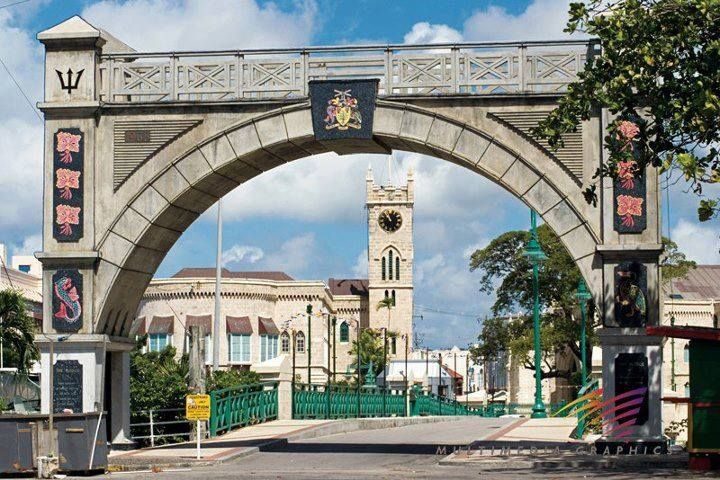 Call it Barbados’ equivalent to France’s Arc de Triomphe.  The Independence Arch, situated in Bridgetown’s city centre, spans the southern end of the Chamberlain Bridge and is directly opposite to the Parliament Buildings.  Designed by Grantley S. Romany, the Arch is now so much a part of the built environment that it is hard to believe that it was only erected in 1987, to commemorate the 21st anniversary of Independence – the coming of age of a nation.

This month as you drive at night in Bridgetown, you will have the thrill of seeing the Arch swathed in blue and yellow light, the national colours of Barbados.  Barbados gained its Independence on November 30, 1966, and in Barbados during the whole month of November, it is celebrated.   If you get out of the car to take a closer look at the Arch by day, you will see that virtually all the symbols associated with Barbados’ sovereignty are depicted.    At the top is the nation’s coat of arms with its motto “Pride and Industry”,    On the pillars can be seen the Broken Trident, so integral a part of the flag, representing the partial break with the Mother Country.

Also showcased is the green dolphin, representing the island’s fishing industry; the pelican, in remembrance of the fact that this bird was once plentiful here and also that there was once an island off Barbados called Pelican Island, now part of the mainland; and the Pride of Barbados, the dainty and delicate National Flower.   Inside each pillar, you will see a picture and profile of the Right Excellent Errol Walton Barrow, the first Prime Minister of Barbados, widely acknowledged as the Father of Our Independence.   At the base of the Arch, inscribed on each pillar, is the National Pledge.   With all of its sociological significance, it is not surprising that the Arch, as part of Historic Bridgetown and its Garrison, has been on the UNESCO World Heritage List since 2011.